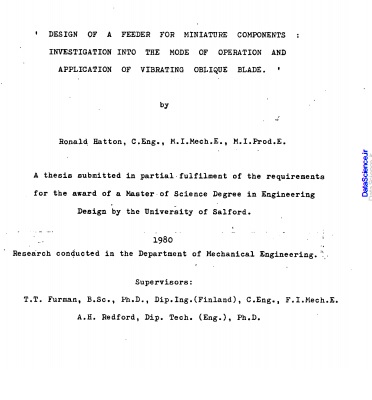 Design of a feeder for miniature components: Investigation into the mode of operation and application of vibrating oblique blade

عنوان: Design of a feeder for miniature components: Investigation into the mode of operation and application of vibrating oblique blade

A brief review of work on the automatic feeding of silicon chips using standard electro-magnetic bowl feeders is given
together with a review on a feeding method using a device consisting of a flat, chip-transporting surface and an obliquely
angled, vibrating blade, positioned so as to plough the chips off the moving surface.
A claim that the new method was independent of the coefficient of friction between the chip and blade edge was found to
be incorrect and this modified the previously assumed mode of movement of the chip.
A mathematical analysis, based on the new mode of movement was made and tested for a range of settings on the special test equipment designed and manufactured for the purpose.
Computer predictions of the rate of feed based on the mathematical analysis were consistently low when compared with the
experimental results, the largest discrepancies occurring for sailer angles of blade setting.
Additional equipment was designed and made in order to obtain values for the coefficients of friction of the chip and the surface, and the chip and the blade edge needed in order to make reasonable predictions of feed rate.

Design of a feeder for miniature components:vibrating oblique bladeپایان نامه